– The event was very successful, says the Chair of the Winner Show Committee Kari Järvinen. Thank you to all participants – exhibitors and visitors, our partners Royal Canin Finland and Agria Eläinvakuutus, judges and ring stewards as well as the numerous volunteers, the people at the Finnish Kennel Club’s office and subsidiary companies, together you created a wonderful event.

At Friday’s Helsinki Winner 2017, the Wire-haired Dachshund Magik Rainbow Verino Roberto Gold was Best in Show. The dog is owned by Victoria Ivanova from Russia.  Best in Show judge was Luis Pinto Teixera from Portugal.

Complete results from the Helsinki Winner 2017 dog show can be found here.

Smooth Collie Clingstone’s Make My Day was chosen as Best in Show at the Nordic Winner Show 2017 held on Saturday. The dog is bred and owned by Satu Asikainen. The Best in Show judge was Kari Järvinen.

The final day of Dog Fair Finland culminated in the group competitions of Winner 2017. Rainer Vuorinen, who ended his long career as a dog show judge at this show, chose Marella Närkki’s Bichon Frisé Jitterbop Clap Your Hands as Best in Show. Vuorinen, who is a very respected dog show judge around the world, has always emphasised the importance of the breed standard when judging as well as the fact that the dog is the star of the show ring.

The best dog of a Finnish breed was also chosen at the show. This competition was won by the Finnish Lapphund Jehnajan Tumpelo, owner Raili Ojanperä. The winner was chosen by Kari Järvinen.

Some 7 600 dogs participated in Winner 2017 and nearly 900 puppies in Voittaja Puppy Show.

Complete results from Winner 2017 can be found here. Results from Voittaja Puppy Show, also held on Sunday, are here. 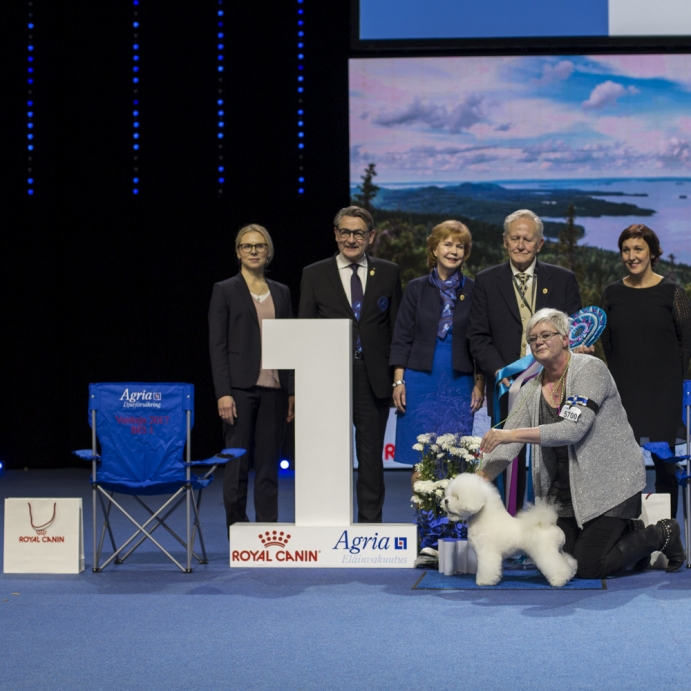 In honour of Finland’s 100 years of independence, an impressive breed cavalcade opened the final competitions of Winner 2017 on Sunday. Picture: Jukka Pätynen