Results from two newly official health examinations are being added to the Finnish Kennel Club's Breeding Database. Results from BAER hearing tests and walk tests, the latter measuring the dog's exercise tolerance and breathing, are saved to the system starting from 6th August.

The veterinarian saves the background information of the examination and the dog's test result to the system. The examination can only be done on a dog that has been identification marked in accordance with the Finnish Kennel Club's rules and regulations. When the information has been filled in and saved, the result is immediately found in the Breeding Database. A small fee is charged from the owner for the online publishing of the result.

BAER hearing tests are used to examine the appearance of hereditary deafness in dogs. BAER stands for Brainstem Auditory Evoked Response. With the test, it is possible to recognise animals that are either bilaterally or unilaterally deaf. The dog's hearing is graded separately for both ears, and the dog's official test result (hearing/deaf) is determined by the grade of the worse ear. If the result for either one or both ears is open, it is recommended that the dog is re-examined about four weeks after the first examination, after which the dog obtains an official result. An open result is always unofficial. 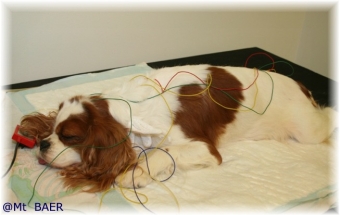 It is recommended that the examination is performed on a young dog. However, the dog must be at least 35 days old. Observe that the test can be carried out only after the dog is identification marked. A BAER test approved by the Finnish Kennel Club can be carried out in Finland only by a veterinarian with a European or an American specialist degree (Dip. ECVN or Dip. ACVIM (Neur.)), or by some other veterinarian familiar with neurology or BAER testing. A list of veterinarians who have been approved by the Finnish Kennel Club to perform BAER tests and allowed the publishing of their contact information can be found here (list in Finnish).

The Finnish Kennel Club's Scientific Committee has stated that dogs that are either bilaterally or unilaterally deaf should not be used for breeding. Even unilateral deafness may cause welfare issues for the dog, for instance if the dog is unable to locate the sounds it hears.

The walk test is intended for short-nosed (brachycephalic) breeds, showing symptoms caused by upper airway stenosis. The dog's exercise tolerance and the ability to breathe normally are evaluated by means of the walk test and the clinical examination included in it. The test result (approved/failed/discontinued) as well as the possible reason for discontinuation is published in the Finnish Kennel Club's Breeding Database.

The test does not measure the dog's maximal performance but separates good breathers from bad. The test is developed together with researcher veterinarians at the University of Helsinki and is further developed based on the obtained results, to make sure that the test is suitable for every breed concerned.

Walk tests are organised by breed clubs, in accordance with the Finnish Kennel Club's rules and regulations. A supervising veterinarian must always be present at the test. Now, there are seven veterinarians that are authorised to supervise walk tests. Right to participate in a walk test is given to dogs which are at least 18 months of age and identified and vaccinated in accordance with the rules and regulations of the Finnish Kennel Club.

?The dog's exercise tolerance is evaluated with a walk test

?Study from the University of Helsinki on which the walk test is based on  (Lilja-Maula et al. 2017)

Dogs imported from Russia and Belarus can be registered to Finland with an exceptional procedure if the Export Pedigree has been issued no later than 15th March 2022 09.3.
Finnish Kennel Club: Breed bans not the best way to go when improving health and well-being of dogs 03.2.
World Small Animal Veterinary Association praises the work done for the health of Finland’s national dog 23.9.